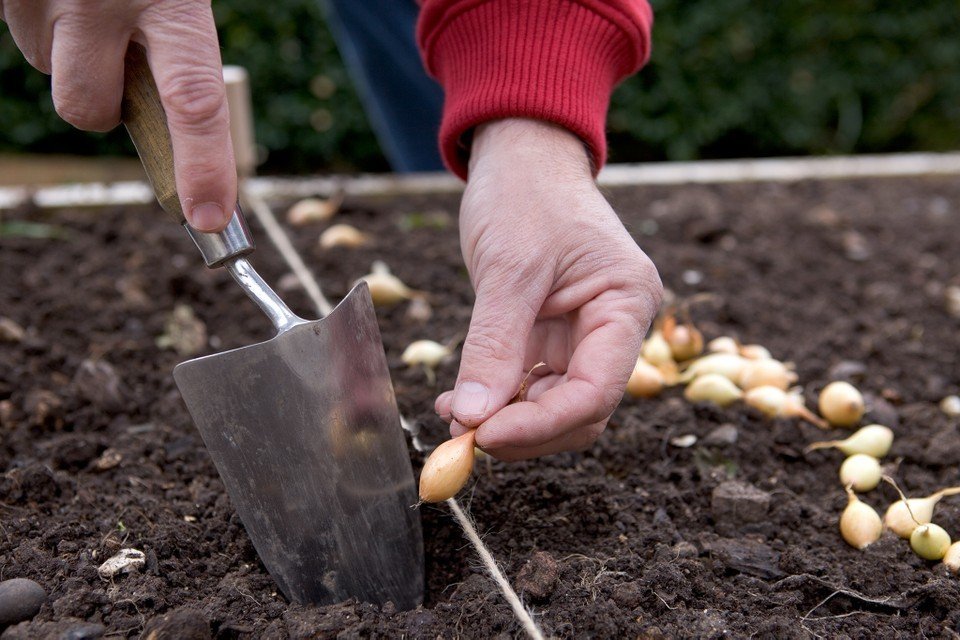 Sowing & Planting in March on the Vegetable Plot

If the weather is cold but otherwise reasonable, you can steal some time and start early by cloching and
fleecing. Although expensive glass cloches have been around for many years, nowadays we can get cheap
polythene tunnel cloches and even cheaper horticultural fleece.

Place the cloche or fleece a week or two before planting and the soil will have warmed up nicely as well
as being dry and easy to work. Water well into the drill prior to sowing and replacing the cloche. Do
remember to water weekly or more frequently in sunny weather under cloches.

To hold down fleece without tearing, save plastic 2 litre milk containers and fill with sand or water
although water tends to leak. The smooth surface will weigh down the fleece but not damage it. It’s
surprising how just a layer of fleece can raise the temperature of the underlying soil.

Plant out your onion and shallot sets. If growing onions from seed started earlier in the year under cover
these can also go out now. You can also direct sow onions, thinning to the eventual spacing. Cloching will
help them establish and also stop pigeons from pulling them up.

March is the right time to establish an asparagus bed if you are starting from crowns. Do make sure you
get it in the right position as it will be there permanently. It will take three to four years before you can
harvest these as a crop, as the crowns need to establish.

Mid-March should let you start planting out those potatoes you’ve had chitting. If you want some really
early potatoes, start some in a black polythene sack in the greenhouse or tunnel. Punch drainage holes in
the sack and use a multi-purpose compost.

Staying with root crops, you can plant Jerusalem artichoke tubers now. Be aware that getting them all up
at harvest time is very difficult and any tubers left in the ground will grow, so effectively you’re creating a
permanent bed.

Under Cover in Greenhouse, Coldframe and Polytunnel

Windowsill or a propagator in the greenhouse will come into use now to start off your tomatoes,
peppers, aubergines and cucumbers.

Many of the crops you can sow directly will also benefit from cloching or started off in modules in a cool
greenhouse or coldframe and then planted out later.

There is still time to finish planting bare rooted fruit trees and bushes, especially raspberries and other
cane fruits.

Early this month you can still prune apple and pear trees while they are still dormant. There is also time
to prune gooseberries and currants. With currants shorten the sideshoots to just one bud and remove
old stems from the centre of the bushes. They’ll benefit from some compost spread around the base as
well or some general purpose fertiliser like fish, blood & bone. Trees will appreciate some wood ash
spreading under them.

Any leeks left standing should come up now – you can freeze them for use in soups and stews or make
concentrated leek & potato soup to freeze and thin out when used.

Parsnips too should come up in early March before they try and re-grow. They’ll store for a month or so
in damp sand but the plant knows it is growing time again. If you turn them into a mash, perhaps with
carrots, they’ll freeze well taking up little room

You may have spinach beet and chards available, the last of the late Brussels sprouts, winter
cauliflowers, kale, swedes and scorzonera. Don’t forget to keep checking the purple sprouting broccoli.

General Jobs on the Plot

Have a good tidy up and finish those odd construction jobs because you are going to be busier still later in the year!

Also a link to an article in the Guardian
https://www.theguardian.com/global/allotment/2009/feb/27/1

And the Allan Jenkins weekly article in the Observer, not so much practical advice as inspirational
and sums up why many of us enjoy our plots so much.
https://www.theguardian.com/lifeandstyle/2020/jan/19/hungry-birds-and-marauding-molescreate-
a-sense-of-wonder-allan-jenkins

Download / Printable Copy: What to do this month on your plot March.pdf