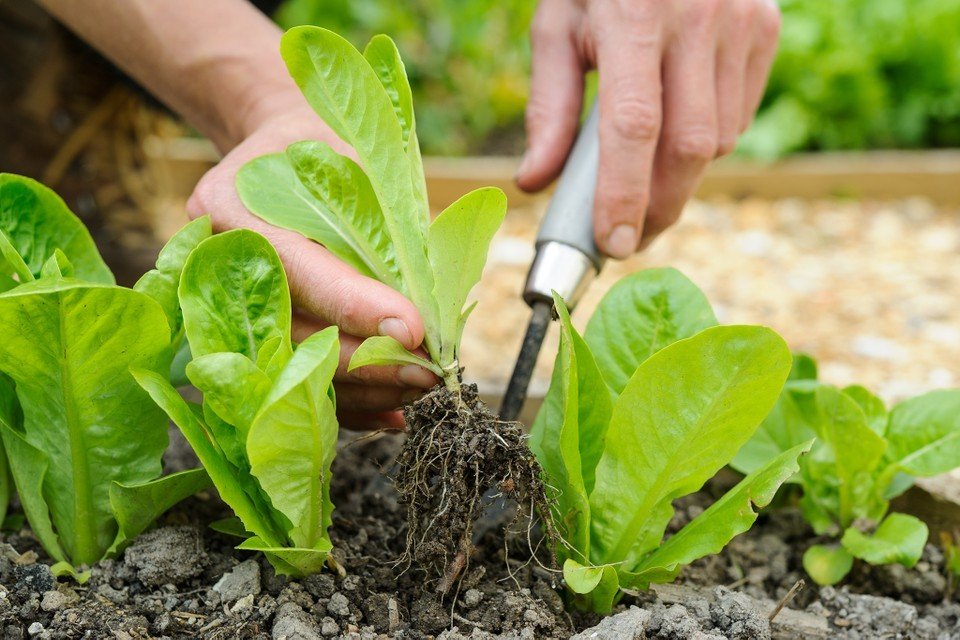 Generally May is one of the busiest months on the vegetable plot. The soil is warm and the plants growing well. But watch out for a sneaky late frost. Keep an eye on the weather forecast and be prepared for frantic last minute wrapping of fleece to protect tender plants.

Planting in May on the Vegetable Plot

There are two main cultivation jobs you need to keep on top of in May. First, the weeds are growing. Hoeing them off as small seedlings will make the job far easier than waiting for them to grow and send their roots down. Hoeing is best done on a dry day so that the weeds do not have a chance to recover. Don’t forget to sharpen your hoe before you start and frequently as you use it.

The other cultivation job outdoors is to thin out. We sow our carrots and parsnips and it seems a shame to remove seedlings we were so happy to see appear but it needs to be done because we need to give each one space to develop rather than end up with a mass of tiny carrots.

The same applies to most crops that are direct sown with small seeds, like turnips, beetroot etc.

There is a lot to sow this month and with many crops you can sow one set and then a few weeks later re-sow to give you a succession of fresh vegetables at the peak of perfection. If it is a dry May, it is a good idea to soak your seed drill before sowing and then just water with a fine rose after sowing and covering with a fine layer of soil.

These really don’t like starting in the cold and you only grow a relatively few plants so starting off in pots is well worth the investment.

Sweetcorn does not like its roots being disturbed so some people pack old toilet roll inners with compost and sow in there, planting out the whole roll when ready. Because you are in a cardboard pot, they can dry out very easily and you need to ensure they are planted with the whole roll below ground level or the collar will encourage drying out and restrict growth. It is easier to use something like root trainers although an ordinary three inch pot will suffice if care is taken at planting time.

If your plants are large enough, you can plant out now:

With leeks a good rule of thumb is to get the seedling about as thick as a pencil. Dib a hole about six inches deep using something like an old spade handle and drop the seedling in. Water well and allow the soil to fall back in naturally.

The old method of trimming the roots and top before transplanting leeks is not actually a good thing and has been shown to be detrimental. It’s a big enough shock to the plant being taken out of its seedbed!

The following are ready for their final home, that may be the border, a growbag or a large pot.

It’s mainly a matter of ensuring that you get the crops rather than the birds. A fruit cage is a big investment but very effective, otherwise netting to keep the birds away.

Strawberries planted this year will perform better in subsequent years if you remove the flowers so they don’t set fruit in the first year but concentrate instead on building their strength for next.

Keep hoeing off the weeds but perennial weeds like dandelion and dock will need their roots removing to prevent re-growth. Bindweed can be a nightmare to stop, any small piece of root will grow. It’s by far the easiest to use a spray of glyphosate based weedkiller, which will go to the roots and kill the plant. However, there are some large question marks now over glyphosate.

Another weed that re-appears at this time is Horsetail (Equisetum Arvense). You will need repeated applications of a translocating weedkiller for this which will keep the plot out of action for a while as it does its work. Organic growers will just need to keep hoeing and removing roots. This will eventually defeat the weed but it’s a long, hard job.

On the subject of weedkillers, if you have used a product such as ‘Weed and Feed’ on your lawn, the mowings may well be toxic to your crops. Check the manufacturer’s instructions carefully prior to composting.

Don’t forget the slugs are about, if you find an entire row of seedlings have vanished overnight you can bet it was slugs.

With your carrots, covering with a fleece and ensuring the edges are buried will stop the carrot root fly from gaining entry to lay eggs by your carrots. The eggs hatch in larvae that burrow into the carrot root, killing the plant or at least spoiling the crop.

Depending where you are and what you planted, you may have some salad crops ready. Hardy lettuce and spring onions, fast growing radish may well be available.

If you tried potatoes undercover, you may well be getting the odd meal from these.

The luxury crop asparagus may be starting for you as well this month.

Download / Printable Copy: What to do this month at your plot May.pdf